Doctor Who Fanon
Register
Don't have an account?
Sign In
in: Vehicles, Jacques the Worthy, Doctor Who: Time and Fates

Back to page
View source 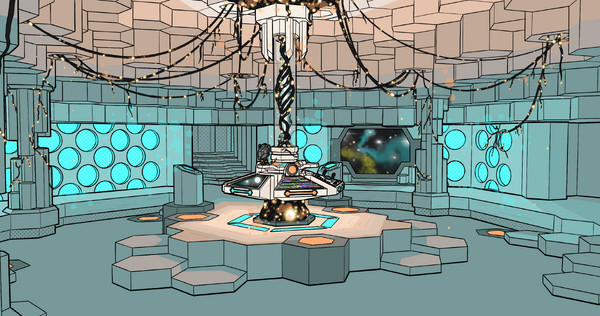 The Doctor stole his TARDIS from the repair shop in the Gallifrey Capitol, in order to escape his home world alongside his granddaughter, Susan. Over the many years since then, he has developed a near-symbiotic bond with his TARDIS, which insists on taking him to places he needs to be, rather than where he wants to be.

Doctor Who: Time and Fates

The current interior of the Doctor's TARDIS is somewhat large, and seemingly carved out of stone. It continues the hexagonal theme of most previous iterations, although to a much more extreme and perplexing degree. The console sits on a raised platform with stairs leading up to it on either side and at the back. There is also a raised walkway around the edges of the room, at the same height as the console's platform, with stairs on either side of the room and at the back as well. On both the main floor and the floor of the console platform, there are several orange hexagonal lights, and beneath each of the six console panels are trapezoidal lights, alternating between orange and cyan.

In four of the rooms' corners there are pillars sat at the edge of the walkway, which consist of hexagonal-shaped columns all connected to each other, but sitting at different heights, with only the very middle columns connecting the ceiling and the floor. These pillars are ornamental, and serve very little function as support. Similarly to the pillars, the ceiling is made up of hexagonal pieces which descend down at various heights, creating an upward rise to the centre of the room where a single piece juts down further to meet the time rotor.

The walls are adorned with roundels, which are backlit with typically cyan-coloured light. When in flight, the lighting behind the roundels pulses. The roundel lights change colour under certain conditions, such as when the TARDIS is in immediate danger and the cloister bells are chiming, the lights change to a crimson colour. When the Hostile Action Displacement System (HADS) is activated, they become pale yellow (similar to the colour previous iterations of the interior had as the default).

Beneath the console, there are a number of cables, which have adapted and evolved to the point they are almost indistinguishable from plant-life. They are black, with glowing orange nodes, and connect the console to the engines. Similarly, a number of these vine-like cables stretch from above the time rotor to the outer edges of the ceiling, connecting the console to the other areas of the TARDIS.

The console itself has six panels, each seperate, but connected to a central piece. Unlike previous iterations of the interior, the time rotor does not have any visible mechanical elements inside it, instead having a blue beam of light at its centre and a number of the vine-like cables spiralling around it. 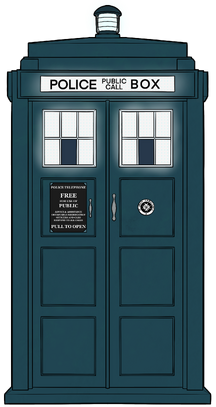 The sign on the door is now black with white writing, while the "POLICE BOX" sign above the door is the opposite, being white with black writing. The "POLICE BOX" sign is also backlit, having an almost consistent glow, to varying degrees based on the TARDIS' activity. The windows are a white/grey colour, save for the bottom middle on each which is a dark blue. The St. John's Ambulance sticker it had during its earlier travels with the Doctor appeared once more.